Thank you for your purchase of our Model 2395 Fuel Selector Switch.

If you have any comments or need additional information on the use of the
2395 Panel, please write us at:

With the 2395 installed and securly mounted inside your flight panel, insert the Cable into the 2395 Connector; then into an unused USB Port on your computer. Your computer will sense the panel's presence and load the appropriate driver software. To see the panel in operation, you can goto the Calibration window and select "Fuel Selector Panel Model 2395". You can now see the operation of all switches. Note the pulse created with the Push/Pull switch when pulled Out and pushed IN. The switch creats a pulse for both In and OUT positions of about 3/4 seconds. This insures that your flight simulator program "sees" the Fuel Cut-Off function for both settings.

Now, turn your attention to the Fuel Cut-off Push/Pull Switch. Pull the switch OUT and program to: "TOGGLE FUEL VALVE ALL". Programming COMPLETE!

Now Exit your Flight Simulator Program. But before re-loading the program, you must configure the Fuel Selector Panel to its DEFAULT Positions. You are probably aware that when starting any flight sim program, switches and buttons are preset into certain positions on-screen. The 2395 is no exception. Before starting your flight sim, the 2395's fuel select knob must be set for BOTH tanks
(12 o'clock position) and the Fuel Cut-off push/pull switch is pushed IN. These settings will now allow the 2395 to be in sync with the pre-fight settings on your flight sim.

Depending on the type of aircraft you have displayed on the screen, you may or may not see the Fuel Select switch on screen. Using the Cessna 172 aircraft found in FS2002, you can easily see the fuel tank selection switch move with each of the 3 settings on the 2395 panel. NOTE: The 6 o'clock switch position can also be programmed as Fuel OFF if so desired.

With these settings complete. . .

website counter
As of January 24, 2018, DTA started delivery on the Model 2395B Fuel Tank Select Panel. Although it looks just like the 2395, the B model has one major change; it is to the Fuel Emergency Cut-off knob.

To the right is a photo of the new wiring for the Push Pull Switch, so as you can see, we incorporated a 2 pin female connector.

To the left shows the modifications we made to the 2395's controller board. There are two 2-pin male connectors on the backside of the board; "A" and "B". A and B are the optional locations where the 2-pin connector from the Push/Pull switch can be connected to.

When the Switch is connected to position "A"; you can program the Fuel Cut-off as:

If connected to position B, the Chrome Switch can
be programmed as:

FUEL VALVE TOGGLE
or FUEL TANK on/off
A
B
These settings are not supported in all versions of FSX, X-Plane ect. You would need to experiment to find the the correct fuel cut-off setting in the sim and type of aircraft you are using.

In X-Plane, you can also look for:

Also, be advised that the on-screen Fuel Tank Select may not show the Emergency Switch is pulled OUT.
This is not an indication of a defective 2395B panel but the flight sim program did not include this graphic when in the design stage.
Addium  6-11-2018 - Setting
FYI Setting for Fuel Emergency Cutoff switch on X-Plane 10 Software

An additional Emer Fuel Setting for use with X-Plane 10: While in the Settings Window, find the fuel directory. Then configure the RED on newer models to:

set fuel select to NONE (shut off) 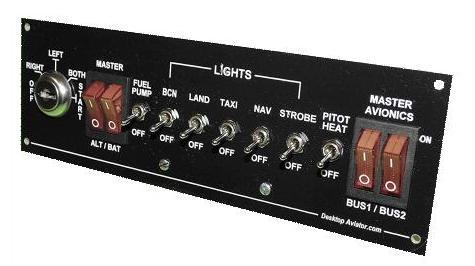 GREEN Light indicates
Fuel Flow while RED indicates
Fuel Cut-off
The Fuel Tank Selector Knob is a Military Styling and is made from Polycarbonate; Matte Black

Addium  8-16-2019 - Setting
Gary, one of our customers, emailed me yesterday to let me know of a new Fuel Cut-off Switch setting he found on with X-Plane 11 using the Cessna 172SP aircraft. He suggests:
Pull Fuel and Mags For Shut Down